A Master Class for NEPTA members with 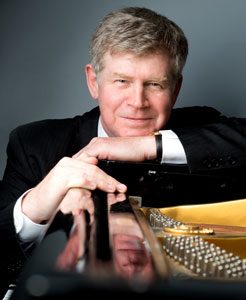 Pianist and conductor Ian Hobson—called “powerful and persuasive” by The New York Times— is recognized internationally for his command of an extraordinarily comprehensive repertoire, his consummate performances of the Romantic masters, his deft and idiomatic readings of neglected piano music old and new, and his assured conducting from both the piano and the podium.

In addition to being a celebrated performer, Mr. Hobson is a dedicated scholar and educator who has pioneered renewed interest in the music of such lesser known masters as Ignaz Moscheles and Johann Hummel. He has also been an effective advocate of works written expressly for him by a number of today’s noted composers, including Robert Chumbley, Benjamin Lees, John Gardner, David Liptak, Alan Ridout, and Yehudi Wyner.

One of the youngest ever graduates of the Royal Academy of Music, Mr. Hobson began his international career in 1981 when he won First Prize at the Leeds International Piano Competition, after having earned silver medals at both the Arthur Rubinstein and Vienna-Beethoven competitions. Born in Wolverhampton, England, he studied at Cambridge University (England), and at Yale University, in addition to his earlier studies at the Royal Academy of Music.

This Master Class is a Fundraising Event. NEPTA is pleased to present this Master class as a benefit for teacher educational enrichment. Donations are welcome! Your donation will go toward NEPTA Susan B. Demb Teacher Enrichment Grants. You may make a donation here or, mail a check made out to NEPTA to Shizue Sano, NEPTA Treasurer, 2 Celia Circle, Methuen MA 01844, or make a cash donation at the Master Class meeting.