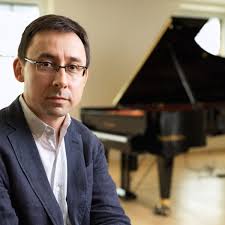 In addition to his international performing career, Mr. Kobrin has also been an active figure in music education for many years. In 2010 Alexander Kobrin moved to the United States. Soon after he was named the L. Rexford Distinguished Chair in Piano at the Schwob School of Music at Columbus State University, and from 2013 until 2017 was a member of the Artist Faculty of New York University’s Steinhardt School. In July 2017, Mr. Kobrin joined the faculty of the renowned Eastman School of Music in Rochester, NY. His masterclass schedule has included engagements with the International Piano Series and the Conservatories of Japan and China, as well as jury participation for international piano competitions including the Busoni,Hamamatsu, Seoul, Neuhaus International Piano Competitions and others. Mr. Kobrin is currently a member of Van Cliburn International Piano Competition pre-screening jury.

Alexander Kobrin has released recordings on the Harmonia Mundi, Quartz, and Centaur labels, covering a wide swath of the piano literature. Latest releases include a Russian album as well as Chopin Complete Piano Sonatas. Mr. Kobrin is the winner of numerous international piano competitions—besides the Van Cliburn, he has garnered top prizes from the Busoni  Hamamatsu, and Glasgow International Piano Competitions.