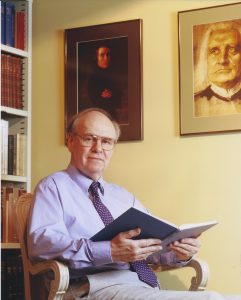 Guests: This meeting is open to the public without charge. Registration required for in person or livestream link.  Click here to register: Eventbrite

“Franz Liszt and the Keyboard”

ALAN WALKER is Professor Emeritus of Music at McMaster University, Canada.  Before settling in North America he was on the staff of the Music Division of the British Broadcasting Corporation in London.  He has broadcast for the BBC, for the CBC, and for CJRT – FM (Toronto), and gives regular public lectures on the music of the Romantic Era. His thirteen published books include A Study in Musical Analysis, An Anatomy of Musical Criticism, and symposia on Chopin, Schumann, and Liszt.

Dr. Walker’s three-volume, prize winning biography of Franz Liszt, was a project which took him twenty-five years to complete, and for which the President of Hungary bestowed on him the medal Pro Cultura Hungarica.  The biography also received the Royal Philharmonic Society Prize, presented by HRH The Duke of Kent in London.

Time Magazine hailed the biography as ‘a textured portrait of Liszt and his times without rival’.  The Wall Street Journal called it ‘the definitive work to which all subsequent Liszt biographies will aspire.’  The Washington Post selected it as a Book of the Year.

For more than a decade Alan Walker worked on a large-scale biography of Fryderyk Chopin, which was finally published in October 2018.  It has been described by The Sunday Times of London as ‘monumental’ and ‘the most comprehensive biography of the great Polish composer to appear in English’. The New York Times called it ‘a magisterial portrait’, while The Economist selected it as ‘one of the best books of the year.’

For his services to music, McMaster University bestowed on Alan Walker the honorary degree of Doctor of Letters, honoris causa. More recently the Government of Hungary inducted him into one of its highest civilian honours: the Knight’s Cross of Merit of the Republic of Hungary.