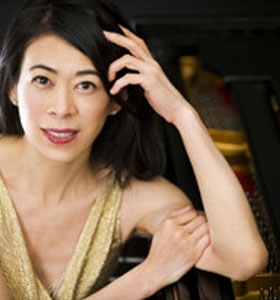 Zoom meeting: Members: on Monday morning login to our Zoom page and join the meeting.

Guests: This meeting is open to the public for a $20 fee. To join the Zoom meeting, click here to register, pay and receive a link to the meeting.

Pianist Jenny Lin is an artist of keen musicianship, brilliant technique, and a compelling perspective shaped by a deep fluency in global culture. Born in Taiwan, raised in Austria, educated in Europe and America, Lin has built a vibrant international career, notable for innovative collaborations with a range of artists and creators.

In this most unusual season, Lin has performances – both digital and in person – at the Mostly Mozart Festival, Washington Performing Arts, Winnipeg New Music, the Morris Museum, St. Olaf College, and elsewhere.

Jenny Lin also continues her collaboration with Philip Glass, performing his Etudes in concerts around the globe. This experience inspired Lin to create The Etudes Project, in which she works with a range of living composers to create new technical piano etudes, pairing each new piece with an etude from the classical canon. The results are featured on Sono Luminus albums; Volume 1 showcases Lin’s work with ICEBERG New Music, and Volume 2 will be released in 2021.

Fluent in English, German, Mandarin, and French, Jenny Lin holds a bachelor’s degree in German Literature from The Johns Hopkins University and studied music at the Hochschule für Musik, and at the Peabody Conservatory. Jenny Lin currently resides with her family in New York City.