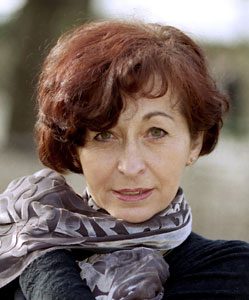 Elisabeth Eschwé comes from a long line of Austro-Hungarian musicians and piano manufacturers. She graduated in piano at the Conservatory of Vienna and received master degrees in English and Philosophy from the University of Vienna. Her love of drama made her later study acting with Professor Lola Braxton.

After completing her studies, Elisabeth Eschwé embarked on a multifaceted career as a pianist and piano teacher. In the 90’s she formed a piano duo with Thomas Kreuzberger and since 1997 with her brother, the conductor Alfred Eschwe. With the violinist Arkadij Winokurow she has played over the past fifteen years.

Since 1999 she has merged her literary ambitions and diversified talents into creating and performing scenic and literary recitals. These include music of the Roma, recitals with her own texts, Vienna between the World Wars, the Austrian Emperor Franz Josef, Frederic Chopin and George Sand, recitals with her own texts, satirical shows (together with Christine Sixthofer and Ulrike Sych) and “Jiddischer Wagner” with Sepp Tatzel, Foremost are her solo programmes about Clara and Robert Schumann and Johannes Brahms.

In piano pedagogy, she has transformed acting methods of Stanislavski into piano playing. She held posts at the Vienna Music University and was director of a music school in Vienna and has a talented student class. She teaches international master classes (Berlin, Amsterdam, Boston, Budapest a.o.) and is a regular guest lecturer at renowned European and American Universities (New England Conservatory, Tufts University, Longy School in Boston, F. Liszt Academy Budapest. a.o.) and is juror in international competitions. She publishes on her teaching method (publications in German, Hungarian, French, English, Bulgarian, Siowenian, Dutch); her students are national and international prize winners; at the moment she is writing her latest book on her innovative piano pedagogy.

Elisabeth Eschwé has toured as soloist, chamber musician all over Europe, parts of the USA, Canada and Australia. All of her solo programs and some piano four-hand concerts are available on CD, the latest internationally acclaimed CD was released in November 2015 with Arkadij Winokurow.